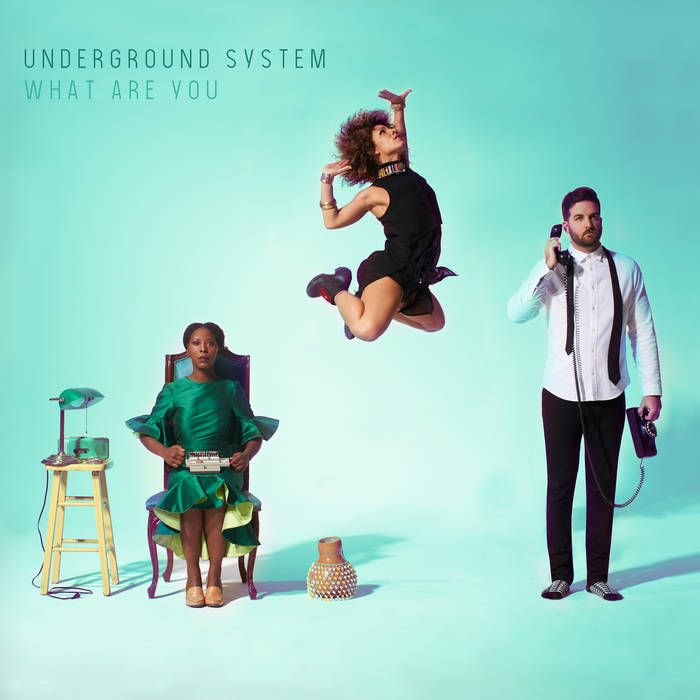 DJ V From CHICAGO The album as a whole is dope is various ways because their are multiple genres of music that they've nailed, from House to Downtempo to even Latin flavors, but this one is funky, jazzy and groovin' all at once in a midtempo package. Great work done here. 💓💓💣💣🔥🔥🔊🔊🌟🌟🌟🌟🌟 Favorite track: State Of Mind.

the space of sound

Brooklyn based band Underground System is embracing all that they are, and what they stand for, on their forthcoming album, WHAT ARE YOU. Due out September 7th on Soul Clap Records.

Underground System is an ever-evolving convergence of musical and cultural influences. The female-fronted group of global dance music deconstructionists have cultivated a sound as inimitable as its members. Something familiar and referential that simultaneously projects a fiercely original energy, the band synthesizes elements of afrobeat, new wave, dance music, and contemporary classical performance, seen through the international lens of a New York City band in 2018. Peter Matson, bandleader/producer, comments, “Our music is heavily influenced by the context that is projected by the New York underground. As much as we are rooted in afrobeat and other well recognized musical styles, we pay homage to the way these sounds were combined and progressed over the years by pushing to find our own original voice.

The Band has built a national reputation around a seamlessly executed stage show, astonishing wherever they go, and compelling crowds to move with unbridled verve. Continuing to reinvent their brand of global dance music, Underground System remains a force determined to recreate, redefine, and reconstruct. Underground System is comprised of Peter Matson on guitar, sampling, Domenica Fossati on lead vocals, flute, and percussion, Yoshio Kobayashi on Drums, Jon Granoff on bass, Lollise Mbi on shekere and background vocals, Olatunji Tunji on congas, Morgan Wiley on synthesizers and keyboards.

Although they are based in New York, Underground System came together from different places, countries, and cultures. Their diverse life experiences including different political times and cultural identities, is the foundation for the new album WHAT ARE YOU, the band’s first full length LP. Previous releases have included two single/EPs and several remix records. The new album was recorded in New York at both Studio G and Transmitter Park Studio, the band knew they wanted to incorporate live elements that might be hard to pull off without the right production approach. Peter Matson adds, “We knew that recording it at Studio G and finishing it at Transmitter Park would be the perfect place. Tony Maimone from Studio G is an indie rock legend that played with groups like They Might Be Giants and Pere Ubu. He was invaluable. Abe Seiferth, who we finished the album with, worked at DFA studio for years. Mixing the record with Abe was amazing and was so instrumental in moving this project along.”

Underground System starting writing WHAT ARE YOU in 2015, with Peter and singer Domenica Fossati beginning with bedroom demos. Once inspired, Peter would program a beat and Domenica would add parts until it started to gel. Domenica Fossati recalls, "The writing process for this album was really rewarding for me because it illuminated the vulnerability of writing lyrics from a deep personal space, pushing me out of my comfort zone."

When it came time to name the album, Underground System knew the direction they wanted to go in. “It’s named after one of our songs on the album, and it’s a personal thing that relates to the formation of the music as well as us as people. We bring a lot of different influences to our music,” says Peter. “What are you?” is also a question often asked to Domenica because of her seemingly ambiguous ethnicity. After all she is a trilingual, of African-American Italian descent, born in the States, and raised in Venezuela and Miami, FL. Peter mentions, “people don’t always know how to deal with what they cannot identify.”

Departing from the extended forms typically associated with Underground System’s live performances and stylistic roots, the new album is a deep 10 track look into the group’s mix of talented personnel and profound sonic diversity. The first single from WHAT ARE YOU, “Go” was released with an accompanying animated video created by Alice Cohen. The video saw it’s worldwide premiere on Billboard. It’s impossible not to hear the band’s development on this track, where they stay true to their afrobeat roots while incorporating elements of new wave, alternative and post punk. The band’s second single will be “Three’s A Charm,” which is deeply rooted in West African music. Other stand-out tracks include the horn driven early 80s disco sound of “Just a Place,” and “Rent Party,” which will remind eagle eared listeners of both Madness and The B52s.

Underground System plans to support WHAT ARE YOU with a national tour, as their live shows have always been the band’s calling card. Known as having timeless sensibility and authority of a killer live band, they’re very proud of the new album and excited for fans to experience these new tracks. Peter reflects, “On this particular record, the biggest challenge was really finding the center of us being a fully original group, outside of it being our first full length LP. The record definitely marks the beginning of us striving to put ourselves out there as songwriters and producers, and to make something that is uniquely our own. We all took this record to our hearts.”